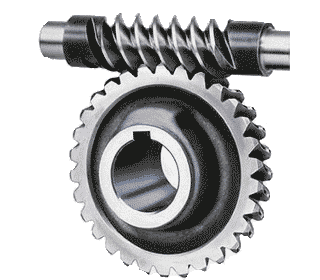 A Worm Drive is a gear arrangement in which a worm (which is a gear in the form of a screw) meshes with a worm gear (which is similar in appearance to a spur gear, and is also called a worm wheel).

A worm drive can reduce rotational speed or allow higher torque to be transmitted. The worm wheel is like a normal gear wheel or spur gear. The worm always drives the worm wheel round, it is never the opposite way round as the system tends to lock and jam. As the worm revolves, the worm wheel (spur gear) also revolves but the rotary motion is transmitted through a ninety degree angle.

We offer a wide variety of Worm and Worm Wheel of all shapes and sizes according to the need and requirement of the buyer.